Just as predators attack their prey in the wild, there are bacteria that hunt and destroy other bacteria. Scientists have now found a way to put these predator microbes to work — to attack dangerous bacteria that cause eye infections and have grown resistant to antibiotics. 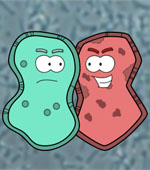 This study was performed by Daniel Kadouri, PhD, an assistant professor of oral biology the University of Medicine and Dentistry of New Jersey-New Jersey Dental School, and published in the online journal PLoS ONE.

There were three major components to the study. The first established that two common antibiotic-resistant ocular pathogens were susceptible to being attacked and killed by other bacteria which act as predators against the pathogens, but are believed to be “good,” or non-infectious, bacteria when they exist within the human body. One point for the good bacteria!

In the second phase, human corneal cells that are native to the eye were tested to see whether those “good” predator bacteria would cause either toxicity or inflammation in those cells. They did not. Another point for the good bacteria!

In the third phase, the “good” predator bacteria were injected into live worms, which are commonly used to test the toxicity of various microbes. 100% of worms injected only with the “bad” bacteria died almost immediately. Other worms injected with the “good” predator bacteria as well had an 11-day survival rate of nearly 95-percent. In addition a lack of change in larval pigmentation following injection suggested that the “good” bacteria also did not provoke an aggressive innate immune response in the worms.

The battle of “good vs. evil” is a constant in our world, but it’s great to see science using the ageless war to our advantage!

“There is no good and evil, there is only power and those too weak to seek it.”― J.K. Rowling, Harry Potter and the Sorcerer’s Stone