Inside the eye, tiny photoreceptors called cones are activated by light.  Each cone is stimulated by a different color, and together, the three types of cones make up the wonderful spectrum of colors we can see. 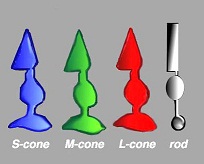 But did you know that cone receptors in the human eye lose their color sensitivity with age? Interestingly, our subjective experience of color remains largely unchanged over the years. This ability to compensate for age-related changes in color perception rests in higher levels of the visual system – the brain – according to scientists.

The research was published May 8 in the open access journal PLOS ONEby Sophie Wuerger from the University of Liverpool, UK.

The study included 185 participants aged 18 to 75 years with normal color vision, and revealed that the appearance of color remains largely unaffected by known age-related changes in the optical media within the lens, but the ability to distinguish between small differences in shades of colors decreases with increasing age, particularly for colors on the yellow-blue axis.

The effects of age were most apparent when participants viewed shades of green in daylight- what appeared uniquely green to younger observers appeared more yellowish to older viewers. The author concludes that certain neural pathways compensate for age-related losses in the eye, so color functions remain largely constant over time.

“We found that colour vision remains fairly constant across the life span, despite the known age-related yellowing of the lens,” says Wuerger. “This suggests that the visual brain re-calibrates itself as we get older.”

As is the theme of recent blog posts, the eye simply collects data and the brain develops that data into the world we see.